What is it you Khan’t face?

One thing I hear regularly from expatmummas is that they don’t feel they have a purpose, because in many cases they have suspended a career to move overseas.Trilby Langdon is a voice to be listened to in a sea of unfulfilled trailing spouses. I have seen the transformation Trilby and her family have made since moving to Dubai and it is an absolute honour to watch them move from poor health (after contracting severe illnesses in India) to great health and ultimately great happiness. She is as resilient a woman I have ever met, and has an inner strength that matches her will. She has been a long term expat and has a wealth of information to share about her experiences and her new career. Enjoy reading about this incredible expatmumma!

Welcome to WIIYKF. Thanks for your time Trilby

Where were you born and where are you currently living?

I was born in Wangaratta in Victoria Australia and I am currently living in Dubai in the United Arab Emirates!

What brought you to this place and how long have you lived here?

My husbands job in hotel management bought us here, and we have lived here just over a year!

What other places have you lived?

What languages do you speak?

How many children do you have and who are they?

I have two kids because I only have two hands. While I thought about having a third I decided against as it as I couldn’t figure out a reasonable way I would travel on an airplane by myself with three kids! So two it is!

What do you love the most about your expat children?

I love that my children celebrate Christmas, Chinese New Year, Eid, Hari Raya, and what ever other holiday their class mates share with them. They have friends from all over the world and have learnt many different languages. I love their sense of adventure, resilience and at the end of the day they know they are Aussies! 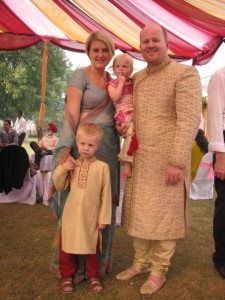 What was your job prior to or during expat postings?

I worked in communications before I was an Expat Mama – I became a new Mum and an expat at the same time! I had a slew of jobs that I chopped and changed as I followed my husbands career selling newspaper advertising, doing promotions for government departments, selling exhibition space, and who ever else would hire me, pay me well and teach me something!

What allowed you to do what you do now?

Working in the work force was not always a possibility with young kids, an impending move or visa restrictions. I did a lot of volunteering and taught English (well….I  sang songs to delighted Indian kids) but once my kids were at school I was itching to get back into something.

I decided I needed to create a business that was flexible and that I could easily take with me on the next move and fit with my lifestyle. I became an International Consultant for a nutritional cleansing product called Isagenix and created my own lifestyle brand. I am able to run my business from home through social media and the internet and I get to connect with like minded healthy people from all over the world and coach them through  Nutritional Cleansing. The perfect thing is that it doesn’t matter where I am based, and I take my success with me where ever I go! As an Expat Mama I am  already used to being flexible, doing things differently and looking outside of the box, this is just another way I have made my globe trotting life fit my lifestyle and what I want – and I wouldn’t have it any other way.

What was the easiest thing settling into a new country?

Not having any friends or social obligations! With out the distraction of people needing you, getting to dates or kids parties or pulled into a class project I have the time to set up house in peace and form a routine based on what’s best for me and my family.

The joy of exploring a new culture and city for the first time is really heady and fun and riding the wave of the honeymoon phase of culture shock!

What was the hardest thing settling into a new country?

Not having any friends or social obligations – it’s a double edge sword and we soon tire of each other! Also not having a clue where to buy bread, post a letter or finding your way around on the roads. In the house, hanging pictures on the wall is fun for the first 10 prints then excruciating!

WHAT is the most challenging thing about being an expatmumma?

What is the BEST thing about being an Expatmumma!

Tell us about some  unique cultural attributes at one of your postings?

What is the most interesting experience you have had as an expat?

When living in Delhi, India a big fierce, mean alpha monkey took up residence on our roof terrace and would come down the fire escape and hiss at us through our dining room window. When the weather got up way over 45 degrees he would come down the stair well and would take a nap on our front door mat to take advantage of the air-conditioning coming under the door gap. It was quite frightening and we had a big stick by the door in case of attack and had to get the driver to come up and get us to to see if the coast was clear. This went on for a over a month and  he eventually  was moved on when I threatened all gardeners, guards and anyone around to stop feeding it otherwise I would do the very anti -Hindu thing and have it “taken care of”.

It’s summer vacation here so it has gone something like this.

Up when we wake and care to roll out of bed, breakfast just in time not to call it lunch. Every second day I rally myself to get to the gym and work out with my trainer. Coerce the kids to get out of their Pjs and brush their teeth and turn off the TV.

Get busy doing something and wonder if I should locate the kids at a the neighbours’ house. Some afternoons I take the kids to tutoring so their brains don’t shrink over the 9 Week long summer vacation or drop them at Karate or gymnastics so their muscles don’t atrophy from sitting in front of the tv…. Oh I mean sitting doing a craft project!

Late afternoon its cooled down enough to swim or go out for dinner. Sleep and repeat….for 9 weeks ahhhhh!!!!

What is the best thing about living in Dubai?

Sometimes the best thing about a place is that it is so different from another posting. After nearly 5 years in India and the chaos and constant adventure weather you liked it or not. Coming to Dubai where everything works, is uber modern and having everything at your finger tips is a huge relief. The beauty of contrast! Everything you have ever wanted to buy or do is available in this city!

Where would your ultimate expat  posting be and why?

What is the best advice you have been given or you would give to another expat  facing challenges in a new country?

Culture shock is like having bipolar. One day is amazing and the most brilliant experience you have ever had, then next you wonder how you will ever get through the day without totally losing it!

What is it you simply KHAN’t Face about living in this country?

The 12 lane duel highway running the length of Dubai and its crazy, not signally, aggressive, tail gating drivers that swerve over 4 lanes to take an exit. When I first arrived the kids had to be silent and the radio off and I had to concentrate like mad when ever I drove on it. Its better now but I still need to be on high alert when cruising down Sheik Zayed Road!

If you are interested in learning more about Trilby visit her page https://www.facebook.com/truelivingbytrilby