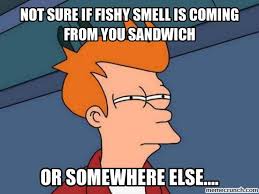 So in the developing world they say the food is not as nutritious as it should be and we need supplements.

I hear the same thing of produce in supermarkets all over the world and am not sold it is just an expat problem But in saying that I don’t recall piles of rotten onions, tomatoes and flies buzzing around the meat section in Australia.

So, because I don’t always by organic fruits or farmer’s market produce, I heeded the advice of many and started taking  multivitamin and Omega 3 supplements.

I have an issue with the Omega 3 knowing that it essentially the juice squeezed out of a fish. If offered any of you a teaspoon of fish juice you would vomit a little in your mouth or say  NO WAY. 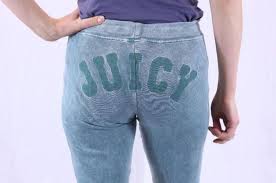 When I was young my grandmother/grandfather/mother/ older brother/ nasty relative used to offer me cod liver oil in exchange for a Caramel Koala. I know I was not alone in my agonising decision to take the spoon( a table spoon) or go without the chocolate. Hence my aversion to fish oils now. I always took the spoon. AGHH Eww pocket spew!

So these days the “cod liver oil” is disguised in these large oval clear gel capsules that are the size of a baby’s little finger, and the multi vitamins are  basically Horse Tablets….

If I have slept well I will put 1 multi and 2  fish juices in my mouth and swallow but mostly I tend to put the horse size tablets in my pockets and forget about them.

Today the unthinkable happened. I was in my “active wear” getting a bit hot and sweaty at the local boxing gym when all of a sudden  all I could smell was fish. Now girls are a bit sensitive to fishy smells emanating from their body and I am no different . 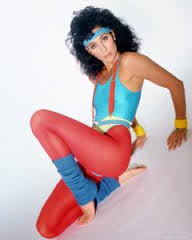 However, I knew I

a) had showered twice that day

b) used soap on my nether regions

c) and not engaged in any sexual activity with a hobo

d) hadn’t dropped a sardine down my pants at lunchtime. 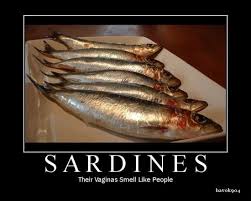 I was erratically sniffing my top, my bra, my arms, my hair trying to figure out what the fuck smelled like fish.I even said to the trainer “can you smell that?” he looked away.Possibly in disgust.

My thoughts were taken back to the book Perfume when he  said was born on a pile of fish by his whore of a mother, then dismissed any negative self doubts and went home thinking it just had to be  the trainer .

Yet I arrived home stinking of fish. Oh FUCK. 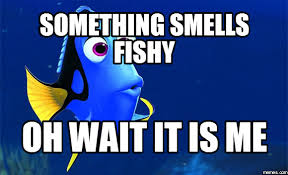 Ok don’t get all hoity toity on me when I tell you the next part. I was confused, disgusted and afraid, so went straight to  the bathroom yanked my active wear down and  and took a big whiff! After establishing and  being   pretty sure it was not my nether regions ( but close)  I then ran to our housekeeper and  basically, in a polite way, accused her of putting my gym gear in a bucket of fish scales.

“WTF?” you say…. No NO really  it was a reasonable assumption. Last week the boys borrowed a bucket from her and took it fishing then scaled and gutted those fish in the bucket. I came to the reasonable conclusion that she threw my gym gear in it! Maybe on purpose  maybe by mistake….

She was mortified, then accused me of going fishing in my gym gear but realised that was absurd so looked down at my pubic region sneering.

She  then   quickly ran around the house reclaiming  all the dark items she had washed the day before. . …..my son’s black tracky pants, his navy blue footy top, my black dress( with pockets) and my active wear were all washed together and stank of FISH.

I was horrified as I inhaled the stench of each freshly laundered item. Enough I said it is too gross and too disturbing. I asked her to rewash everything with double soap.

I took a shower re sniffed my now clean body ( no fish smell)  and headed downstairs. The housekeeper presented to me what appeared to be a large pice of rodent pooh……. one weird arse pellet looking thing. She claimed to have found it   in the pocket of my dress.

On close inspection and a  quick review of my weekend antics.( it was my birthday) I surmised the rodent pooh   used to be my horse tablet of a  multivitamin. Hmm why was it in my dress. Oh yeah  remembered I had not taken my supplements that morning as I was about to go out,  so thought I should pop them in my pocket go to the pub and  down them with a giant pint of Murphy’s.

I wonder what  could have possibly happened to the 2 giant fish oil capsules?

OH MY GOD my running pants smelled of FISH in public! 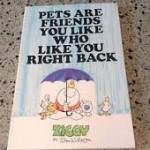 We have some residual guilt about taking our children away from their friends in Mongolia. Pets are as good as friends are they not?Replace friends with pets? Yesterday we  celebrated our 8 year olds birthday and  overcompensated on a whim by entertaining his desire for a pet.

We thought *we would take the “easy option”  All you Pet owners are shaking your heads, scoffing and saying, “YEAH RIGHT you crazy fool there is no easy option for anything in life especially PETS.”

Well let me tell you something Smarty Pantalonas! You are damn right.

So  Andy  then what happened? I hear you muttering  through with smugly smirking face…….

I will reiterate, Max was upset he only has 1 friend and was sad about not having a big birthday  party. I wanted to ask him if he had read my account of missing friends in “Lonley Expat” but thought better of  mentioning that on his birthday.

“We” decide to treat him to a special day. He got whatever he wanted for breakfast( crappy sugary cereal) followed by a morning movie, some minecraft time and then a trip to the Aqua Park. What a great day. He opened his presents most of which broke due to poor manufacturing and I told him (without consulting his father) that we had an extra special gift for him that evening to which he needed to take an outing.

I had decided FISH would be a great gift after Max had taken delight at  a fresh water Indian puffer fish at my husband’s work. I thought we could either steal that one or go to the aquarium and buy him another.

Well  fish theft is not in my husbands vocabulary, but  then I can’t blame him he didn’t grow up in a pub in Melbourne in the 1970’s & 80’s that was frequented by  criminals and cops.( They all look the same in plain clothes….)

um so the FISH… My husband got home after an arduous day at the office when Max pounced on him and said there was a special surprise gift and we had to go out to get it. Of course husbando stared at me  and with pleading eyes says, “errr….what did you tell him?”  “Oh come on let’s just go”, so  we hop in  the car for a hair-raising, white knuckle Kurdistan car ride to the Pet Store.

I instantly regretted the decision when we walked in  and  that “easy option” floated off with the pirañas, slithered into the distance with the rare exotic snakes and was gulped down by the crocodile in a wayyyyy to small a tank… Shit what is wrong with me! I just wrote about Middle Eastern Pet stores FOOL.

We perused the array of  normal common aquarium fish on offer and noticed that some tanks had black tape on them. It signified they were CARNIVORES. “Ok boys nothing from the tanks with the black tape. Now hurry up and choose some fish”

1 hr later and choking on 2nd hand smoke that all the sales assistants puffed out in the store, we had a tank, 3 ghost fish, 4 Zebra fish, 4 Tetras a couple of catfish cleaner fish, 2 whiskery stripy fish, a skull, Aztec ruins and fake aquatic plants.

12 hours later 2 ghostfish have died,  1 was stuck in a fake aquatic plant, 1 died in the car on the way home, the catfish are looking green around the gills and a bit of googling has uncovered some revelatory information.

I waited until the new  8 year old awoke so he could feed them. “Nah you do it mum”,  and off he walked to eat crappy cereal and watch  TV…..

For him pet care does have an easy option… Let mum do it!

* there was no WE at all it was all my thinking.