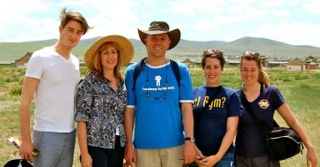 Welcome to WIIYKF. Thanks for your time Carol.

Where were you born and where are you currently living?
Born in Sydney, Australia. Now in Nagoya, Japan.

What brought you to this place and how long have you lived here?
An invitation to teach at a Japanese university – have been here on and off for 5 years. With the young people all in or finished tertiary study it’s a new phase in life – have started to take short term work overseas myself.

What languages do you speak?
Two badly: English and Japanese

What do you love the most about your expat children?
Their unusual resilience and perspective on life – I was there when they learned it. In fact we caused most of it. What an amazing life we shared together as they grew up.

When they sponge, whine or grandstand. Not much patience for these three behaviors. We have been on the road as a family since 1990, and are always recovering from our own readiness to be constantly disrupted like this – always need all hands on deck for everyone to reinvent themselves and thrive in a new situation.

What was the easiest thing settling into a new country?
The shock and pleasure of the new, the scent of immense possibilities, the romance of improbable adventures, the challenge of living by one’s wits and instincts, of overcoming strange odds, of sucking the marrow out of life.

What was the hardest thing settling into a new country?
The lack of old friends with skin on right there who know us, and intuitively ‘get’ us – the inherently isolating experience of being constantly misunderstood. Takes time to cut through people’s perceptions about the type of person you must be because of what you look like or where you seem to have come from. Sometimes there just isn’t enough time – and so shallow brushes with people are all you take away from some situations.

WHAT is the most challenging thing about being an expatmumma?
Suppressing your own feelings of loss and dislocation to focus on helping the young people you hauled with you to the new location to reinvent themselves, cope with being a fish out of water, and find new identities for them to inhabit and thrive in.
Seeing how your efforts pay off – but how it means that while your husband enjoys celebrity status, showered with privileges, perks and parties, you labor unseen – the stolid, predictable machinery that ensures stability and sensible, well-educated children you can both stomach when the posting is over – as well as the one who charts the costly, risky path through the tax, financial, career and extended family implications and complications of taking each posting.
From time to time this means you give him a solid dose of hearty commonsense to remind him that he is not a celebrity at home, and the day you leave the post will be the day he is forgotten by those who fawn over him now. No doubt this works the same way no matter which partner is the one posted.

What is the BEST thing about being an expatmumma!
Scintillating, intoxicating adventures – not necessarily glamorous or planned – often unexpected – when embedded deeply in places you barely dreamed of visiting let alone living in – experienced TOGETHER with the people I love most.

Tell us about some unique cultural attributes at one of your postings?
In the space of one summer in Japan being asked to leave a public pool after we were seen putting sunscreen on the children’s skin as it would “pollute the water”, and having the children told to remove their rash shirts and shorts (they had nothing on underneath) at the school pool because “you can’t wear clothing in the pool”. Subsequently developed a whole spiel in Japanese about the sad lack of melanin in Caucasian skin and skyrocketing skin cancer rates in Australia.

What is the most interesting experience you have had as an expat?
Bizarre: having an attendee at an Australian government event in the U.S. mistake me for some kind of officially-provided counsellor and confess his romantic indiscretions to me, including introducing me (politely dumbstruck) to both the people he had betrayed, each of whom remained blissfully unaware.
Fascinating: 30 hours on the Hogwarts Express – a train from Ulaanbaatar packed with young Mongolians heading back to Beijing to study at the end of summer. Vast, empty steppes mind-blowingly beautiful. Nomadic herders stare; urchins peddle sweets at lonely windswept outposts; decaying Russian-era buildings untouched since Stalin’s day. Five-hour midnight border crossing, the Chinese army collects our passports and we are left sleepless and exhausted inside the fully-lit carriages as they are shunted into a shed and slowly lifted by hydraulic arms. The middle-aged Mongolian women who have been our carriage attendants change out of their mini-skirts and heels to hustle underneath and push out the Mongolian bogeys so the Chinese can push the local bogeys in. Realizing that a different railway gauge is a needed national security measure in this part of the world. While the Mongolian countryside is vegetable plot free, crossing into China means every square centimeter of land – even railway land right beside the tracks is suddenly forced into arable production – immediate evidence of the immense pressure of the Chinese population…

Describe a usual day?
Work long hours in my university office in Japan on a forthcoming book and an article due for submission to a journal, my role as the chair of a chapter of an NGO in my field, or meeting graduate research students to mentor their thesis writing – staying in touch through the day with family and friends via social media – scamper home late on the train to my miniscule studio, get up and do it again, every day of the week.
A radically different life to when I was the ‘trailing spouse’ through a long series of always abruptly-announced postings for my partner. With children grown I will still accompany him in future – and gladly – but will also be marching to the beat of my own drum developing my ‘encore’ academic career.

What is the best thing about living in Nagoya?
The food and the people (well ok, mostly the local women).
Impossible to get a bad meal in Japan, never have to cook myself – fresh, healthy affordable ready-made meals sold at all supermarket and convenience stores on every corner, open all hours.
Japanese women are tiny towers of resourcefulness and strength – only just beginning to discover their voice in society, business and politics – and just in the nick of time too…

What is the best advice you have been given or you would give to another expat facing challenges in a new country?

What is it you simply KHAN’t face about living in this country?
Have actually faced this on and off for over 30 years, but the Japanese tendency to “strain at gnats (obsess hysterically over compliance with meaningless nitpicking rules to avoid taking responsibility) while swallowing camels (steadfastly ignoring overarching principles like the rule of law, human rights, or fairness) still gets my goat, and likely always will.

Thanks  Carol XOXOX
Thanks to you too, lovely, generous, creative Andy for the chance to think about, write and share these things XOXOX